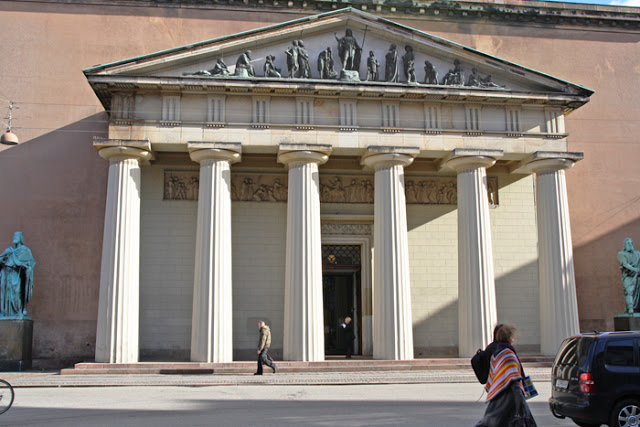 Construction of the original Collegiate Church of St. Mary, began no later than 1187 under Bishop Absalon. The church was located on the highest point near the new town of Havn, later Copenhagen. Bishop Absalon (1128–1201) was Bishop of Roskilde(Zealand), Denmark’s capital of that era, and spent most of his life securing Denmark from foreign attacks.

He also built many churches, monasteries, and founded Copenhagen as a Denmark’s Baltic port city. Named Archbishop of Lund in 1178, Absalon accepted only under threat of excommunication. St. Mary’s construction continued sporadically until 1209, when it was consecrated by Absalon’s successor, Bishop Peder Sunesen on Annunciation Sunday in March, which became the church’s traditional feast day. The church was built in Romanesque style with its half-rounded arches inside and out.

In 1314 a fire destroyed the limestone church so completely that it was rebuilt in the popular new building material of the day, over-sized red brick. The style of building was Gothic, with its typical pointed arches. The rebuilding of the simple church with a long nave and choir continued until 1388. Due to a lack of money, the great tower was not built until the reign of Christian II. It was as high as the church was long, and from artwork of the day, out of proportion to the size of the church.

A school was established early on. In 1479 parts of the church school received a charter and become the University of Copenhagen. Professors were brought from Cologne, Germany. The international faculty widened Denmark’s exposure to the great ideas and philosophies of the day. The university challenged the growth of the Protestant movement, but was eventually closed. By 1537 it reopened as a center for Lutheran studies.

The Protestant Reformation was hard on the St Mary’s. Citizens of Copenhagen had elected to follow Luther, but Catholic officials at St Mary’s tried to maintain the church as a center of Catholic resistance to change in Copenhagen. By royal decree both Catholic priests and Lutheran preachers were commanded to use the church jointly, which incensed the majority of Copenhagen’s population. On 27 Dec 1530 hundreds of citizens stormed St Mary’s, destroying every statue and dismantling the choir stalls. The 17 richly gilt altars were stripped of jewels and gold and smashed, as were reliquaries, vestments and altar equipment. Even the name «St Mary’s» became «Vor Frue Kirke» (Our Lady’s Church), keeping the historic reference to Mary without the use of the un-Lutheran «Saint» appellation. Just a year later Our Lady Church celebrated the acceptance of the Lutheran Order presided over by Johan Bugenhagen, an associate of Martin Luther. 1539 saw the installation of the first Lutheran superintendents, later bishops, of Denmark. In 1568 the dean of Our Lady Church was charged with defining accepted practice for Lutheran church services in Denmark under the direction of the Bishop of Zealand. Ever since, the dean (and later bishop) of Our Lady Church has carried out that role in the Danish National Church.

Lightning strikes damaged the church in 1573 and 1585, and some of the vaulting, tower, and roof collapsed after the resulting fires. The tower was eventually torn down, but rebuilt by 1609. It had an extremely tall pyramidal central spire with four shorter spires at each corner.

The medieval proto-cathedral was completely destroyed by a four day long conflagration in October 1728 which destroyed a third of the city. All the many chapels and eighty epitaphs commemorating some of Denmark’s most prominent nobles and wealthy parishioners vanished. A decade later, the church was reconstructed, essentially on the same plan as the medieval church, in red brick with a simple long nave and rounded choir added at the end and ornate sandstone doorways beneath the spire. The interior combined Gothic and with the ornate Baroque style of the time. Ranks of tall half-round windows let in natural light, and ribbed brick vaulting arched high overhead from two long rows of squared pillars supporting the roof. A row of side chapels ringed the nave and choir giving the appearance of a five aisled church which impressed all who entered, including King Christian VI who oversaw the building’s progress with impatience. Friedrich Ehbisch carved a magnificent new altarpiece and pulpit in the finest Baroque tradition. The best-preserved ancient gravestones from the floor of the old church were replaced in the floor, although not in the same locations.

After the 1728 fire, the new tower rose, higher than the previous one tapering to a tall spire modeled after the spire of St. Martin in the Fields in London. The bells from St Nikolai Church were moved to the new spire in 1743 and a set of four new bells were cast and added. The largest bell «The King’s Bell» weighed just over 6000 kg. Eventually, the tower held 42 bells. It was popular at the time to pay for extra ringing after weddings and funerals, which was a source of complaint by university students who were trying to study. A smaller tower in the same style was added to the roof line above the choir.

In September 1807 the cathedral fell victim to the bombardment of Copenhagen by the British Navy under Admiral James Gambier in the Napoleonic Wars. The English demanded the surrender of the Danish Fleet and the city. The Danes refused, but with most of the army on the Schleswig-Holstein border, the city was nearly defenseless. For three days the British fleet bombarded the city and coastal forts. British gunners used the tower of Our Lady Church for range practice, setting it ablaze, which in turn burned the church to the ground, along with nearby sections of Copenhagen. Copenhagen surrendered, and in a humiliating defeat for Denmark, and the fleet was turned over to the British.
Denmark’s finest architect, Christian Frederik Hansen, and the city magistrate redesigned the cathedral in the Neo-Classical style. Due to a lack of resources they incorporated elements of the surviving walls. The old surviving vaulting was blown up to make way for a church built in the new style. A pillared portico and a flat interior ceiling and simple classical lines are very different from the medieval church. The cornerstone was laid in 1817 and the work completed by Whitsun Day 1829. Bertel Thorvaldsen was commissioned to decorate the interior with statues of Christ and the apostles; Judas Iscariot replaced by St. Paul. Other artists also contributed sculptures and paintings. Thorvaldsen carved and donated the modern font as a personal gift.

The tower, based on the older medieval tower, became a controversial afterthought. The Neo-Classical style did not include towers, but citizens demanded and got a tower modeled on the older medieval tower. The tower is 60 meters high and contains four bells. «Stormklokken», cast in 1828 by Soren Hornhaver, is the heaviest bell in Denmark at 4 tons. The oldest bell in Denmark also hangs there cast in 1490 by Olug Kegge. It was transferred to Our Lady Church from Antvorskov Abbey Church (Klosterkirke). A third bell was cast in 1699 by Friderich Holtzmann. The fourth cast by Anker Heegaard in 1876.

Our Lady Church was designated a Denmark’s National Cathedral only in 1924. Its relatively recent cathedral status stems from the splitting of Zealand (Sjaelland) into two Lutheran dioceses in 1922.

Major renovation organized by Professor Vilhelm Wohlert in 1977-79 removed various additions that had accrued in the interior of the church over the years. A new large central organ was built by Marcussen & Søn in 1995, with a choir organ added in 2002. The crypt has been converted into a museum which contains models of the various iterations of the building. 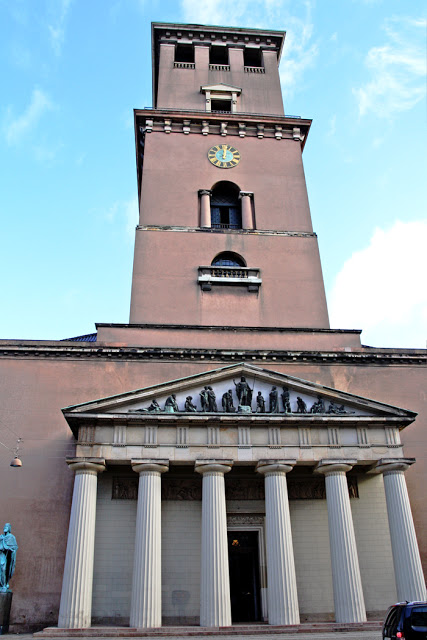 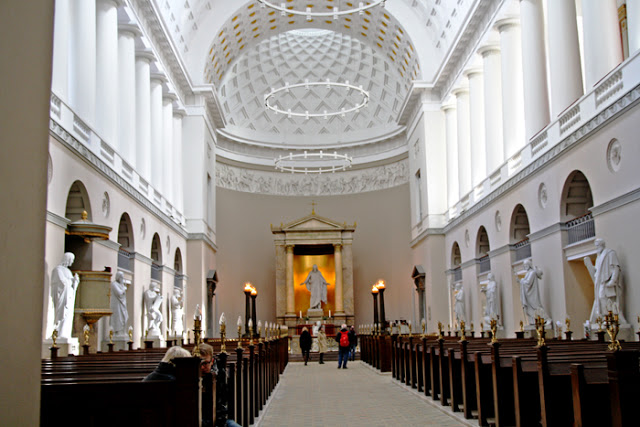 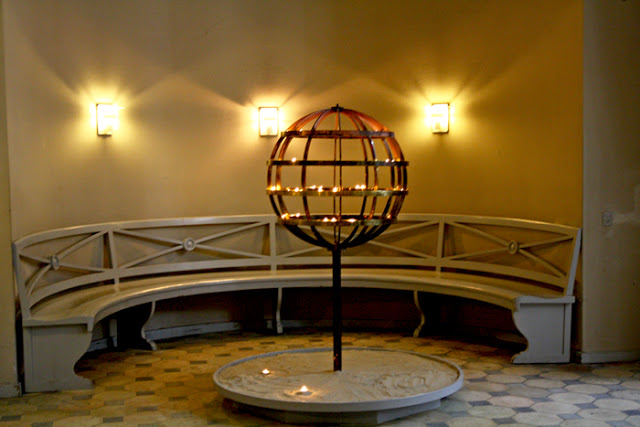 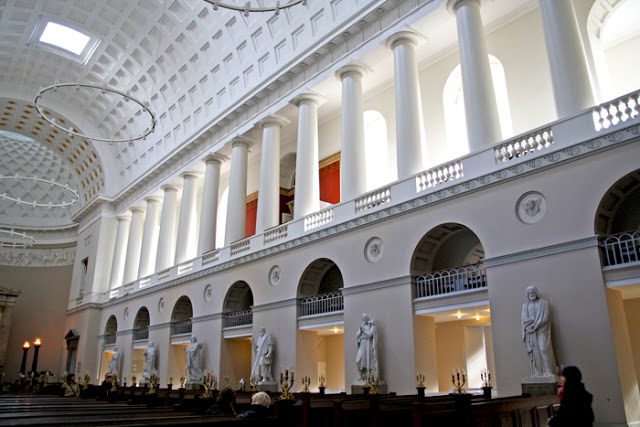